We got our first look at Jed Lowrie in July of 2007 and my first impression was that this kid just up from Double-A seemed like a 10-year major league veteran.  He was 23 years old but acted like he was 33 (at least when he was on the job).

His parents – Dan and Miriam – did a great job of raising him.  He’s smart, respectful, and strikes me as intellectually curious.

That was apparent as Jed dealt with the broken bone in his left wrist that has sidelined him for most of this season.

The injury actually occurred in May of last year while he was still with the PawSox.  Despite pain that affected his grip strength, Jed gutted it out and started 54 of Boston’s final 63 games last year.

His wrist appeared to be fine in spring training when Jed batted .343 with 8 doubles, 2 triples, and 3 home runs.  But it was obvious when he opened the regular season 1-for-18 that the pain had returned.

“I had the opportunity to allow it to heal over the offseason,” Lowrie told me.  “From what I’ve understood, the scar tissue in there started to wrap around that bone and hold it in place but once I started playing every day in spring training, it broke right back down.  I felt it specifically one game when we went up to Tampa to play the Yankees, and it wasn’t the same feeling as I had last year so I didn’t really say anything – I wanted to see if it would get better.  But it never really got better and just steadily got worse as it did last year.  Then I woke up one morning and I had the exact same symptoms as I had last year and that’s when I brought it up.”

Jed had his wrist examined by 5 doctors in 3 states before electing to have surgery on April 21st – specifically an arthroscopic ligament repair and the removal of the ulnar styloid bone.

“I was getting some mixed signals and I just wanted to get as many opinions as I could,” Lowrie said.  “I found one that I liked and someone who made sense and so I went with that route.”

Two months later, he’s back in action.  Jed joined the PawSox on a rehab assignment on Sunday that is expected to last for a couple of weeks.  He’s 0-for-4 with 2 walks so far, but has hit the ball extremely hard in two of his four at-bats.

“The wrist is doing better,” Jed told me.  “I went through a lot with surgery and I haven’t played in two and a half months, so I want to be up in Boston as quickly as I can, but at the same time, I want to take my time and make sure it’s right.  I just need to keep in mind that I haven’t played and not worry about what I do on the field as opposed to getting myself ready.”

Nick Green has done a nice job filling-in at shortstop in Boston, but the Red Sox will get a significant boost when Lowrie is ready to return.

Whenever the PawSox play in Durham, one of the highlights is a batting practice contest to hit the big wooden bull (from the movie “Bull Durham”) that is perched high above the 32-foot “Blue Monster” wall in left field.

The players usually throw a few bucks in the kitty and have some laughs competing for the loot.

I saw Jeff Natale and John Otness hit the bull yesterday, but wasn’t able to stick around long enough to see who the big winner was.

By the way, as you can see in the photo, it says “Hit Bull Win Steak.” 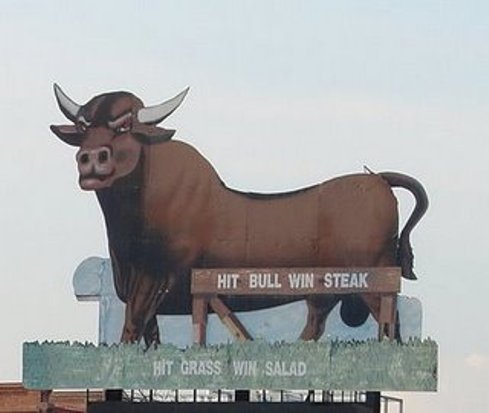 Unfortunately, that only applies to players from the home team.  Former PawSox infielder Ed Rogers homered off of the bull a couple of years ago, but did not win the prize.

A few nights ago on ESPN’s Sunday Night Baseball, analyst Joe Morgan was passing along “Happy Father’s Day” wishes to some new dads and one of the athletes he congratulated was Joe Thornton.

It made me wonder how he knew the former Boston Bruin now starring for the San Jose Sharks.

Well, as it turns out, Joe Morgan meant to congratulate Joe Thurston, the former PawSox now playing for the St. Louis Cardinals.

He and his wife Raquel had a baby girl named Jaylee a couple of weeks ago.  Congrats!

The PawSox open a 4-game series on Tuesday against Norfolk – the first place team in the IL South.  I hope you’ll join us for the radio call beginning with the pre-game show at 7:00 on the PawSox radio network and PawSox.com.

I’d love to hear from you.  The address is dhoard@pawsox.com.