As of 5:55 pm on Wednesday night, Chris Carter is still a member of the Pawtucket Red Sox. 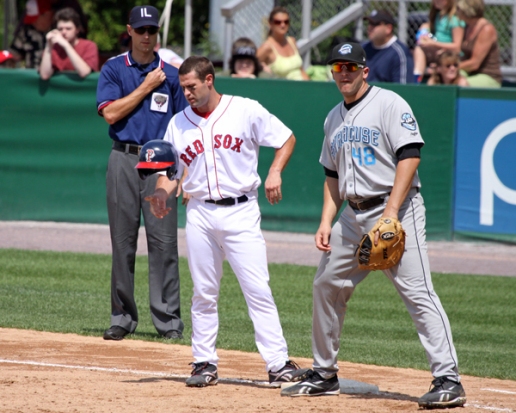 He took batting practice before tonight’s game, but is out of the starting lineup for the 7th consecutive game.  All signs point toward Chris being in the middle of the waiver process before being officially traded to the New York Mets.

If and when the deal goes down, Chris should get plenty of opportunities to play in September in New York.

Have you looked at the Mets outfield and first base situations lately?

With Carlos Beltran, Carlos Delgado, Jeff Francoeur, and Fernando Martinez out with injuries, the Mets are trotting out the likes of Angel Pagan, Daniel Murphy, Cory Sullivan, Fernando Tatis, and Nick Evans.

Not exactly the ’27 Yankees.

When I arrived at the ballpark today, I expected Carter to be taking some serious verbal abuse from his teammates (along the lines of, “What are you doing here?” or “Aren’t you supposed to be in the visiting clubhouse?”) but it has been minimal so far.  Gil Velazquez did hit him with a “Do you think you can hit the ball out of Citi Field?”

I suspect we’re all going to find out soon.