On Wednesday, 32-year-old Brian Gordon – who had made 3 major league appearances in 15 professional seasons – used an opt-out clause in his contract to leave the Lehigh Valley Iron Pigs.  Yesterday, he was the starting pitcher for the New York Yankees.

Do you think the Yankees would have preferred Andrew Miller?

The 26-year-old lefty had a June 15th opt-out clause but elected to stay in the Boston Red Sox organization.

“You have to look at all of your options, but just because it’s an option doesn’t mean it’s a good option,” Miller told me.  “Everything has gone as well as I could have hoped for and I would hope that the organization thinks the same thing on their side.  I signed here because it seemed like a good fit and it seemed like a good organization and so far it’s been better than I could have expected.” 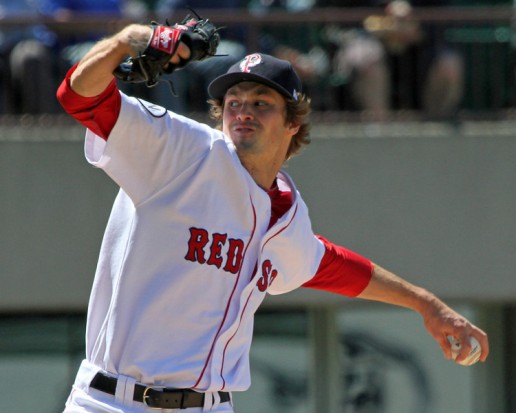 It’s been widely reported that Miller met with Red Sox G.M. Theo Epstein on Wednesday and was told that he would start for Boston next Monday in a home game against San Diego.  Miller did not confirm or deny that report, but did acknowledge talking to Epstein.

“I had a conversation with him and he told me generally what will happen and they’re going to take care of me and I am a big part of their plans,” Miller said.  “My goal in signing here was to get better, but also to help the big club win some games at some point, and I’m looking forward to that opportunity when it comes.”

After 13 outings for Pawtucket, Miller is 3-3 with a 2.47 ERA and is holding opposing hitters to a .181 batting average – the lowest of any starter in the International League.  Since altering his pre-game routine to pitch a simulated inning in the bullpen, Andrew has posted a 1.80 ERA in 4 outings with 3 walks and 26 strikeouts in 25.1 IP.

“I go out with (pitching coach) Rich Sauveur maybe 10 or 15 minutes earlier than most guys would and get loose like you would before the game,” Miller said.  “Then I sit down with Rich and the catcher and do a mini half-inning where we sit down for 4 or 5 minutes and talk and maybe go over the lineup a little bit.  Then I get up and try to simulate game speed and simulate hitters and maybe work out some kinks that generally I’ve had to battle in the first inning.  By the time I go out and pitch in the real first inning, it feels like it would in the second or third inning.  So far it’s been great.  I think it’s accomplished everything we were hoping it would, and I’ve gone out there and felt aggressive and in the zone to start the game.”

If the news reports are accurate and he’s about to take the mound at Fenway Park on Monday, Andrew says he’s ready to face big league hitters.

“I’m certainly confident that if I throw the ball the way I have in the last three weeks or so that I will do pretty well and hold my own up there,” Miller said.  “You never know until you go up there and compete, but I certainly like the way I’m throwing the ball and I like my chances.”

Technically, Luis Exposito has not made his major league debut.  But the 24-year-old catcher is a big leaguer after spending two days on the Boston Red Sox active roster last week at Yankee Stadium.

“I think the highlight was calling my father and letting him know that his son reached the major leagues,” Exposito said.  “We were both very emotional and it was an unbelievable experience.”

With the recent trade of Michael McKenry to Pittsburgh, Exposito is clearly the first catcher in line for a promotion if a need arises in Boston.  After getting a taste of major league life, Luis is eager to get back to the show.

“It makes you realize how special it is to be up there,” Exposito said.  “That difference that everybody talks about and you see on TV and read about – I got to live it out.  That is where we all want to be and it definitely makes you want to go back.”

Daisuke Matsuzaka underwent Tommy John surgery last Friday, and since most pitchers require at least a year to recover, there’s been rampant speculation that Matsuzaka may have thrown his last pitch as a member of the Boston Red Sox.

I thought it would be interesting to ask Hideki Okajima, through his translator Jeff Cutler, if he thought that Daisuke would return to pitch in the United States or go back to Japan.

“I can’t answer that question,” Okajima said.  “But there are very few Japanese pitchers who have had that surgery and have had successful comebacks.  Having said that, Daisuke is still young and I’m sure he will recover quickly.  I’d like to see him come back strong and continue playing in the U.S.”

As for Okajima’s future, he declined to discuss his recent request to be traded, saying that reporters should speak to the Red Sox front office about his future with the organization.  The 35-year-old lefty did tell me that he feels good physically and would like to pitch for at least two more years.

“At the very least, I would like to play until my uniform number – until I’m 37,” Okajima said.

I wonder if that is the real reason why Alfredo Aceves wears the #91.

The PawSox opened a 4-game series against first-place Lehigh Valley with a 6-5 win on Thursday as Ryan Lavarnway drove in the winning run with a 10th inning single.

If you can’t make it out to McCoy, I hope you’ll join us for radio coverage beginning with the pre-game show at 6:50 on the PawSox radio network and pawsox.com.

I’d love to hear from you.  The address is dhoard@pawsox.com.

And I have finally joined Facebook.  Just search for Dan Hoard and look for the photo of me with the handsome lad.