There was no bigger mystery on the UC football team last year than kicker Tony Miliano. 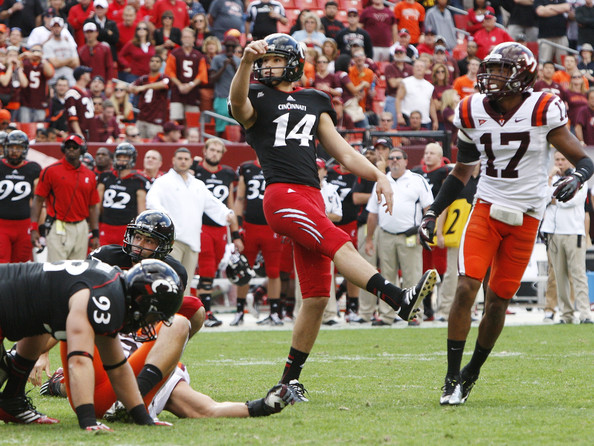 Miliano thinks the mystery has been solved.

“I went back and watched the film after the season and found out that I was leaving my hips open and everything was missing right,” said Miliano. “I don’t know if you even noticed, but every miss went right except for the one at UConn. I think that I was trying so hard to pinpoint the problem the whole year that I overcorrected things that didn’t need to be corrected. Then you get into a funk and it goes into your head. I don’t think that I’m a head case, but when you’re trying to fix something like that, it’s not going to go too well for you.”

If you’re a golfer, you can probably identify. If you start to struggle and suddenly have a million swing thoughts, the problem usually gets worse.

I asked Miliano if kicking is more mental or physical.

“I’d say it’s 50/50 really – if not more mental,” he said. “We come out here and do this all the time and know how to do it. It’s just that you have to come out with the right attitude, and you have to be able to do it on a regular basis.”

Miliano worked with kicking gurus Tim Williams and Brandon Kornblue in the offseason, and enters his senior year in a battle for the placekicking job with redshirt freshman Andrew Gantz. On the first day of training camp, each kicker made all six of his attempts in 5-yard increments from 20 to 45 yards.

“The young kid was ahead over the summer, but we’ll base it pretty much on handling pressure out here,” said head coach Tommy Tuberville. “Both of them hit all of their kicks today, but it’s a little bit different when they turn the lights on and we start scrimmaging. That will pretty much tell the tale. I’d say it’s neck and neck right now.”

“Andrew had a great spring and a great summer as well, so it’s a really good competition,” said Miliano. “Andrew is a good kid, so it’s good that we’re pushing each other and making each other better.

“When I went out there today, it’s unbelievable how comfortable I felt. I felt so relaxed – the way that I felt two years ago and the year before that. Comfortability is a huge factor when you’re out there before all of those fans and I can’t wait – I really can’t.”

What he can’t wait for is another chance.

“Oh my gosh, I can’t even describe how happy I am,” Tony told me. “Seriously, I’m really lucky – not just to have another season, but to have all the guys around that support me after what happened last year and the coaches that are still hanging in there with me. I’m super happy and I can’t wait for September 12th.”