Mick Cronin is the most competitive person I have ever met in any walk of life. 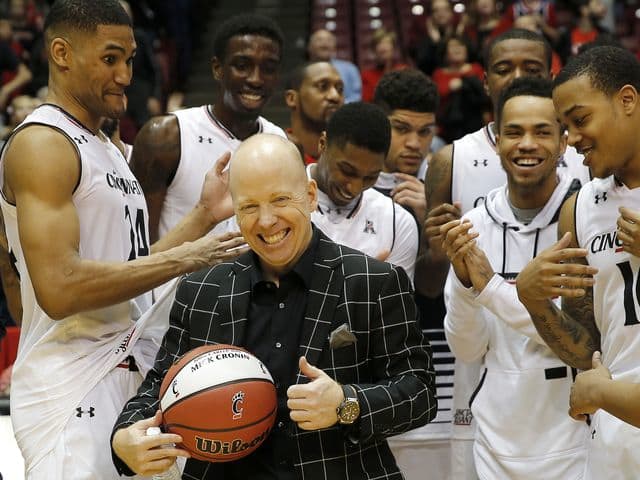 He’s been my friend for roughly 20 years. We’ve celebrated memorable wins together, shared a ton of laughs, enjoyed great meals, and traded parenting tips since our kids Sam and Sammi were born about five months apart.

And yet, I still found him intimidating after a loss

When he would come out of the locker room to do the postgame radio interview, it seemed like his entire body was clenched like a fist. The tension was palpable as he seethed about what went wrong.

Additionally, members of his staff would privately joke about how miserable things were going to be the next day.

That competitive fire didn’t only show up after losses.

On the day of a game he couldn’t eat until it was over.

“When the schedule comes out I immediately look to see if we have 9 o’clock games at night,” he said earlier this year. “Those are really rough days. I can maybe eat a muffin before a night game but I just have too many nerves for my stomach.”

To me, that helps explain why Mick is a tremendous coach and did such a remarkable job in restoring Bearcats basketball to its place among the most successful programs in the country.

He’s a lifelong student of the game and a brilliant defensive tactician. But first and foremost, he demands effort. And his teams reflect his hypercompetitive personality.

“Effort is so important to who wins a basketball game and what you’re willing to accept is everything,” he told me. “You’ve got to try to get that edge. That’s not going to guarantee you victory, but it’s going to give you your best chance.”

Another key to his success if that Mick has the courage of his convictions. While he was always self-evaluating and trying to improve every aspect of the program, his core message never changed.

It certainly worked at Cincinnati where Mick won 296 games in 13 years, made nine straight trips to the NCAA Tournament, captured back-to-back AAC tournament championships, and won 89 games over the past three seasons – the winningest three-year stretch in school history.

But it might surprise you to know what accomplishment meant the most to him.

At our final weekly radio show of the year – the day after the conference tournament win over Houston – Bill Koch from GoBearcats.com asked Mick to reflect on the job he had done in revitalizing the program after the messy departure of Bob Huggins.

“It’s been a great run and it’s been a great honor of my lifetime professionally to coach at my alma mater,” Mick said. “Nine years ago we won on Senior Day and we dominated Georgetown – who had been to Final Fours and had pros and was a dominant team in the Big East. You know what I went through early on with teams that were outmanned and such. That was the moment where the arena was packed again, it was a Ring of Red game and everybody was wearing red, and there was no more animosity over former presidents or former coaches. People were just UC fans. People that had maybe been pitted against each other and had to pick sides – that was a moment where I thought that was all over with for the most part. They weren’t thinking about all that stuff that went on while I was at Murray State that was unfortunate and hurt the program and the school. To get to that point was my goal when I took the job. So from that point really it’s all been icing on the cake.”

Mick Cronin leaves the program in great shape. With the $87 million dollar renovation of Fifth Third Arena, a talented roster in place, and a great academic track record, there will be no shortage of coaches eager to take his place. Since becoming athletic director, Mike Bohn has made home run hires in Luke Fickell, Michelle Clark-Heard, and Scott Googins among others, and I am excited to see who he lures to replace Coach Cronin.

I am also excited to see how Mick does at UCLA. I have no doubt that the same formula that won big in Clifton is going to work wonders in Westwood.

Most of all I am grateful for our friendship and appreciate all he’s done for Bearcats basketball.

It was fun to have a front row seat.