Michael Warren opened last season by running for 142 yards and three touchdowns in the win at UCLA. He ended it by earning MVP honors in the Military Bowl as he rushed for 166 yards and two scores in the victory over Virginia Tech.

Despite missing the regular season finale against ECU with a shoulder injury, Warren finished the season with 1329 rushing yards – the third-highest single season total in Bearcats history and only 32 yards off DeMarco McCleskey’s record of 1361 yards set in 2002. Warren’s total of 20 touchdowns (19 rushing, 1 receiving) broke David Small’s previous record of 17 touchdowns set in 1993. 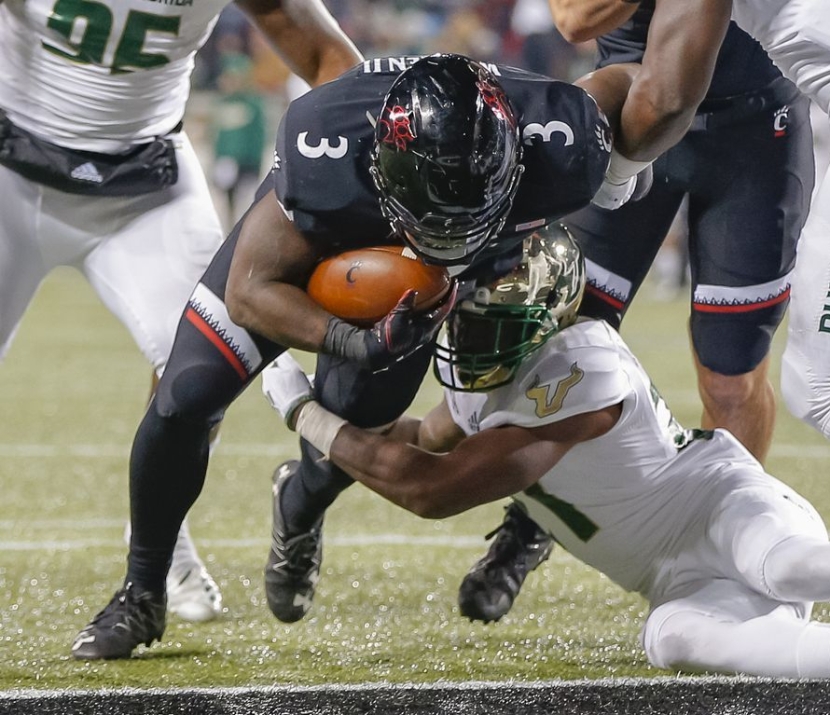 As the Bearcats conclude spring football, I spoke to “The Truck” as he prepares for his junior season.

Did you exceed your own expectations last year?

“Honestly? Going into the season I didn’t expect to have that good of a year. It was just the will and the determination of wanting to win for my teammates. We had a bad taste in our mouths from (the previous) year, you know? But it’s always been a dream and a goal of mine to do something like that in college. I feel like I can do more. Last year people just started to get to know about me.”

You weren’t far off the school record for rushing yards in a season and you missed a game due to injury at the end of the regular season. Is that record on your radar going forward?

“Not really. I really just play the game for my teammates and go out there and compete. I love to compete and try to outplay the running back on the other team. Coach Fickell always talks about competing on every play and if you strain and impose your will on your opponent you get results like that.”

You did get the single-season touchdown record. What did that mean to you?

“Man, I’m blessed and I thank God for getting the record. I didn’t even know how many I had to get, but it’s cool having the record. I’m a record guy. I’ve been breaking records since I stepped on the field for high school football. Records are meant to be broken and I’m sure that at some point, one of those young guys like Tavion (Thomas) or Chuck (McClelland) is going to break it.”

Last year you guys formed a three-headed monster and this year it could be four with the return of Gerrid Doaks. How competitive is it among you guys?

“It’s about the brotherly love and the good competitive spirit in the running back room. We all know there are a lot of good running backs in the room and we all compete every day. I feel like that makes everybody better. When somebody gets their chance they want to make the most out of it.”

How happy is your friend James Hudson to be here (a former high school teammate who transferred from Michigan)?

“James is ecstatic to be here. He loves it. There’s nothing wrong with Michigan. He just feels like he fits better here. He fits in with everybody and he can play. That boy can ball. He’s going to be in the NFL one day.”

Was your positive experience a big factor in James winding up here?

“That’s my best friend. Once I heard that he was transferring I tried to get him down here. He’s a great offensive lineman and I’m a running back. The O-line is looking very good this year and James fits right in and gets along with everybody. He’s an athletic tackle and I just hope that he gets his waiver (to play immediately). I just think that no kid should have to sit out (after transferring). It’s a waste of time. A coach can get a new job and leave without anything happening but when a kid leaves he has to go through all these rules and regulations. I feel like if a kid wants to play they should just let him play. But I’m praying for James.”

I like watching you practice because you’re feisty. Is that a good word to describe your attitude?

“Everybody is feisty in practice. You have to practice how you want to play. If you practice hard you’ll get results in the game. There are guys that are just as good as you everywhere. It makes the team better as a whole if everybody goes hard on every play. You might be playing against your best friend, but when you’re out here on the field you’re not friends.”

Do you have a chip on your shoulder?

“I’ve always had a chip on my shoulder. I was overlooked in high school by a lot of colleges but Coach Fickell gave me a great opportunity to come here and I’m making the best out of it and doing the best that I can. I have a lot of people counting on me and you want to play with a chip on your shoulder. You don’t want to miss out on any opportunities.

When a lot of schools tell you that you’re not fast enough or not good enough it puts a big chip on your shoulder. Especially with all the accolades like winning Mr. Ohio, and running for all those yards and scoring all those touchdowns. You feel like, ‘What results do I get?’ But I’m blessed that I met Coach Fickell and the rest of the coaching staff. Coach Fick gave me a great opportunity and he believed in me from day one. That’s all that matters. When you’ve got somebody who believes in you and is going to push you and can be your father away from home.”